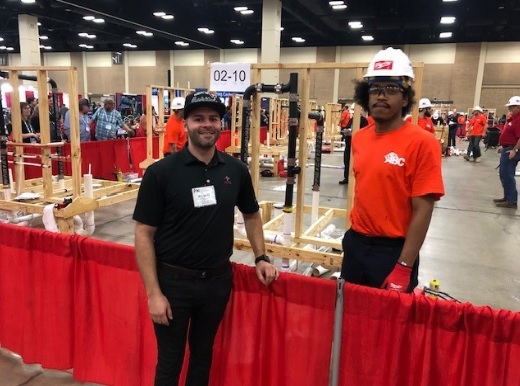 Rockville, MD - Edwin Garcia did not leave this year’s ABC National Craft Championship in San Antonio with the first-place trophy. What he did come home with is even more valuable.

“It was a great experience,” says Garcia, a Vito Services commercial plumber who participated in the plumbing competition of the Craft Championships. “But ever since I’ve been back, I’ve noticed I’m much more engaged in my jobs, have been working quicker and more efficiently. I guess I gained a lot of confidence by competing and think I’m an even better plumber now than before.”

There was a record 29 contestants in this year’s plumbing competition, which was scored by a four-judge panel. The plumbers were given their assignments shortly before the competition began, which does not give much time to prepare for the six-hour timeframe.

This year’s competition consisted of four separate jobs that all come together at the end:

Drains: run PVC pipe to wall, which runs into a cast iron pipe

Garcia says he was prepared for all the work, but in hindsight, might have changed the order of his work.

“I started with the drain, but it took a lot longer than I thought,” Garcia says. “In hindsight, I may have done some of the easier work first, since the drain took so long.”

Garcia says he noticed what some other plumbers were doing but thought his strategy was solid in starting with the hardest part first. It also took some time for Garcia to get used to the set-up, his station and the competition-provided tools.

“Don’t get me started on those tools,” Garcia jokes.

In the end, it was lucky the competition provided tools, since Garcia was not permitted to bring them on the airplane, forcing him to miss his original flight.

“I had a great time, met so many other great plumbers and technicians … it’s an amazing competition in a beautiful city,” says Garcia. “My only complaint in about the tools. I was told we could bring tools, which made me miss my flight because they wouldn’t allow me to carry them on. But once I got out there no one was allowed to use their own tools, which makes it fair for everyone, just wish they would’ve told us beforehand.”

The plumbers were also required to use the competition-supplied calculators, which slowed down the process.

“I’m not great at math, so without my personal calculator I had to write out all my work with the pencil and one piece of scrap paper they provided,” says Edwin. “Not having my own calculator was almost as bad as not having my own Torch.”

Even with unfamiliar tools, Garcia still placed in the top 10. Even though he did not quite finish his fourth and final assignment (less than 10% plumbers finished all four assignments within the 6-hour competition window), his quality score was graded high. No plumbers dropped out of the competition, though a few arrived late after a long night of festivities up and down the San Antonio Riverwalk.

“We are proud of the work Edwin has put in advancing his plumbing education, and this was a chance for him to show off all the great things he’s learned,” says Residential Plumbing Manager of Vito Services Anthony Vito, who was on-site to cheer on Edwin after having competed in the competition himself several years back. “He did a great job. Maybe some other schools prepared their guys a little more for the competition, but Edwin is in school and here to learn, and this was a great showcase for him to prove that which he did.”

Even though they could not all come with their own tools, each contestant was given a set of new tools to bring home from top sponsor Milwaukee Tools.

In addition to his new tool set and several new friends that he is keeping in touch with, Garcia came back from San Antonio with something immeasurable.

“I proved to myself I can handle anything that gets thrown my way,” says Garcia, who has been a plumber at Vito for over 5 years. “It’s a confidence that I can tackle any job as well or better than any other plumber out there.”

Vito Services is a full-service plumbing, heating and air conditioning company, proudly serving the Alexandria, VA, Rockville, MD and Washington, D.C. areas. Since 1934, they have been providing their community with expert repairs and quality workmanship for both residential and commercial customers. To learn more about Vito Services or to schedule an appointment, visit them online at VitoServices.com or by phone at (301) 315-6100.