Lt. Col. Ted Blickwedel, VA whistleblower, and his co-author, Jerry Strayve, announce the release of Broken Promises - Marine Combat Veteran Turns Whistleblower Exposing Compromised Mental Health Care for Veterans at VA. This book, written to create awareness and advocacy for veterans and counselors who serve them, will be released via Amazon on June 15, 2022. Additionally, the book stands as a plea to work cooperatively with the Veterans Administration to enact policies and procedures to safeguard quality mental health care for veterans and protect counselor welfare.

Kindle versions of the e-book are available on Amazon for $6.95 at https://www.amazon.com/Broken-Promises-Whistleblower-Exposing-Compromised-ebook/dp/B0B3YY2ZT3. 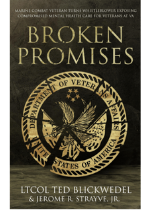 Broken Promises outlines actual events documented by Lt. Col. Blickwedel and co-author Jerry Strayve during and after Lt. Col. Blickwedel's employment as a mental health provider for the VA's VET Center Program. This book is a heart-wrenching story of a Marine Corps veteran's crusade to repair the broken promises caused by the VA. Broken Promises reveals Lt. Col. Ted Blickwedel's fight against the VA Vet Center's mandate of quantity over the quality of care—excessively increasing counselor workloads at the expense of quality mental health care for veterans with PTSD.

Never intending to be a whistleblower, Blickwedel experienced retaliation through shunning, isolation, gaslighting, mobbing, and false accusations. His undying dedication to pursuing truth and justice has led to Congressional legislation holding the VA leadership accountable to prevent this travesty from continuing.

Recapping Blickwedel's history as a retired Marine Corps Lieutenant Colonel and combat veteran, he became a Licensed Clinical Social Worker. He provided mental health counseling for fellow veterans at the VA VET Center in Warwick, RI, from 2009 to 2018.

In 2017, during his tenure at the VET Center, he began to 'speak truth to power,' attempting to have the VA VET Center Management revise their clinical productivity policies harmful to counselors and compromising quality care for veterans. His subsequent whistleblowing campaign came at a great price, personally, professionally, financially, legally, and health-wise. 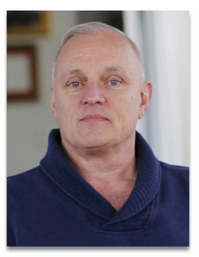 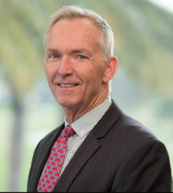 The book shares statements of Veterans who felt neglected and betrayed after counselor performance standards increased, preventing clinicians from spending adequate time with them. Many clients terminated their relationship with the VET Centers. In some cases, this proved tragic. A Veteran expressed, "… a big rug had been pulled out from under me… I was nothing but a number. I never went back for counseling… My nightmares came back."

On the other side, a counselor confided to the authors, "This decreased the quality of care we were able and capable of providing. The policy change resulted in an immediate interruption to the veteran patient and their family's care. The change was felt immediately, resulting in burnout."

Co-author Jerry Strayve shares that the broken promise stems from Abraham Lincoln's commitment in 1865, "— to care for him who shall have borne the battle, and for his widow, and his orphan."

"When Ted came to me with his story, I was aghast. Not in disbelief of the veracity of what had happened, but that it had happened again! Having experienced the military's medical community's callous lack of compassion for active-duty personnel and their families, I felt compelled, honored, and driven to help Ted write his shocking story," said Jerome Strayve, Jr.

Currently, there is a bipartisan drive in the United States Congress to pass legislation introduced to the House and Senate Veterans Affairs Committees. The premise of the legislation originates from a federal GAO investigation Blickwedel helped instigate substantiating his allegations.

This legislation protects the quality of services for veterans and their families and safeguards the welfare of counselors who care for them at over 300 VET Centers nationwide. Blickwedel's crusade to rectify compromised mental health care and counselor well-being within the VA VET Center program has been featured on NBC and NPR, including the Military Times, other publications, and local news broadcasts.

Veterans ask Americans to reach out to their Senators and Congressmen, encouraging passage of the legislation pending in both houses. The legislation, entitled the VET Center Improvement Act, is designed to correct the injustice perpetrated on Veterans and the clinicians who serve them. It ensures veterans, their families, and counselors will no longer be at the mercy of the misguided bureaucrats within the Veterans Administration.

Retired Marine Corps Lieutenant Colonel and combat veteran who became a Licensed Clinical Social Worker after he retired from the military. He worked as a counselor at the VA VET Center in Warwick, RI from 2009 to 2018 where he provided mental health care for fellow veterans.

He is currently urging the United States Congress to pass legislation that has been introduced to the House and Senate Veterans Affairs Committees, because of a federal GAO investigation he helped instigate which substantiated his allegations. This legislation will protect the quality of services to our veterans and their families, as well as safeguard the welfare of counselors who care for them at over 300 VET Centers nationwide.

Blickwedel’s crusade to rectify compromised mental health care and counselor well-being within the VA VET Center program has been featured on NBC and NPR, including the Military Times, other publications, and local news broadcasts.

Served with Ted Blickwedel when both were young lieutenants in the Marine Corps. Forty years later their paths crossed again. This led the two of them to co-author Blickwedel’s story in Broken Promises.

Strayve was born to a nomadic military family, attending nine schools before entering college. Following service in the United States Marine Corps, he raised a family while working as a financial representative and serial entrepreneur. Raising his young children, he discovered his talent for ‘spinning tales,’ regaling them with spontaneous bedtime stories.

Soon his passion for history spoke to him and he jumped into writing. His fiction works include the first two books in a four-book series, ‘Braxton’s Century. Book three in the series will be published in February 2023. He published First Spouse of The United States in 2019 and is releasing the sequel, POTUS DOWN, in the fall of 2022. Learn more about JR Strayve, Jr. at jrstrayvejr.com.

To book Ted Blickwedel and Jerry Strayve for interviews, appearances, and presentations, or to find out more about purchasing print copies of the book in bulk, contact the following:

For more information about Broken Promises, contact the company here: